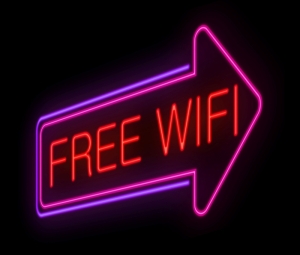 Back in the heady days of my diary, my friends and I have moved out of university accommodation and are living in a rented house a mile or two away from the campus. We chose it because it was cheap at £11 a month each and provided a roof and running water. The fact that at least some of this water ran steadily through the ceiling into my bedroom and that slugs crawled all over the living room furniture every night doesn’t seem to have entered our thinking.

Twenty-eight years on, my eldest daughter is looking at prospective universities and I’m quickly discovering that the list of student accommodation must-haves has lengthened considerably. An absolute given is something that was barely dreamt of when I was a student – Wi-Fi. Accessing books, films, games, the library, lecture notes and even friends and family used to require effort, planning, movement and often (horror of horrors!) physically relocating yourself miles away from your current position. Now, the same activities are available from your student room at the touch of a tablet, in a way that feels eerily like the world in E. M. Forster’s haunting short story, ‘The Machine Stops.’

Wi-Fi has quickly become one of those attributes that somehow makes a place seem more desirable. Its rise has been so meteoric that it’s fast approaching the status of utility rather than luxury  – an upstart must-have without the historic gravitas of water, heating and lighting, but part of a new breed of suddenly essential services, like its sibling mobile telephony. Wi-Fi lets you feel at home even when you’re on the move, to remain together even while you’re apart.

‘Does it have Wi-Fi?’ is the connected generation’s ‘Are we nearly there yet?’ It’s a question asked of everything from shopping centres and trains to pubs and holiday destinations. High streets are awash with individual networks, with retailers banking on the fact that data-starved users on less reliable or more expensive mobile connections will crawl to the nearest hotspot like thirsty explorers to a desert oasis.

The idea that Wi-Fi adds a certain something to a location isn’t new. As long ago as 2004, realistic plans were being drawn up for whole towns and cities to offer free, municipal networks. Despite the fact that many of these early projects failed (through a combination of cost, practicality, technical hitches and competition from the big mobile networks), optimism over city-wide Wi-Fi persists – embodied in big projects like the UK government’s super-connected cities initiative.

Whichever university my daughter ends up in, I’m pretty sure that ‘how do you connect to the Wi-Fi’ will almost certainly be one of the first questions she puts her hand up to ask.

I’m depressed. Or rather, my 1985 self is depressed. My diary today is a stark and rather maudlin list of the names of eight good friends I’m about to leave behind – probably forever*. I’m getting ready to go back to university in Hull, but more importantly – now that they have successfully launched me from the family nest – my parents are in the process of upping sticks and moving house from rural Norfolk to the bright lights of the Bavarian capital, Munich. Once they move, ‘going home’ will never be the same again.

The eight names are like a roll call of the lost.

Keep in touch, maybe? Send letters? Ridiculous. At 19, the very idea was embarrassing – and how did you put pub banter in writing anyway? The occasional phone call? No chance. No access to a phone and no money for calls either.

No, all is lost. Might as well forget them all now and be done with it.

Life these days couldn’t be more different. Facebook and other social tools mean that losing contact is almost more difficult than maintaining it, and relationships can seemingly be sustained with much larger numbers of people. According to an April 2013 study by Stephen Wolfram,  the median number of friends per person on Facebook has now reached the dizzy heights of 342. This number varies with age of course, with younger users having substantially more ‘friends’ than those in older age groups.

The people we ‘friend’ on Facebook change with age too. Most of our friends in our younger years tend to be about our own age – then as we get older we start branching out a little. Wolfram also explains why it is that so many of our friends appear to have more friends than we do – a real world phenomenon called the friendship paradox.

It seems numbers of friends may be important for reasons other than notional popularity too – the more friends you have, the more money you’re allegedly likely to earn. In 2009, the BBC cited a 35-year study of 10,000 US students which suggested that the most financially comfortable in later life were those that had the most friends when they were at school. Each extra friend added a not insignificant 2% to their future salary.

But friendship surely isn’t a numbers game.  And is it really possible to have active friendships with the hundreds of contacts that Facebook encourages? Enter British anthropologist Robin Dunbar, who proposed a hard-wired limit to the number of people with whom we can maintain stable social relationships – an idea popularised as Dunbar’s number. The most oft-quoted Dunbar figure is around 150 – way below Wolfram’s median of about 400 friends for Facebook users in their early twenties.

The obvious conclusion is that what’s happening on Facebook (and elsewhere) isn’t friendship in its traditional sense, but a set of relationships built more loosely around values like mutual awareness and availability. As a result, it’s perhaps unsurprising that Facebook and (more effectively) Google+ have both introduced ways for us to group friends according to the kind of relationship we want to have with them. In other words, they’re facilitating their users’ retreat to something closer to Dunbar’s number.

Of the eight friends I left behind in 1985, the absence of social media combined with our collective male apathy meant that I eventually lost touch with all but one. I’m sure the current crop of Facebook users will fare far better, but the jury’s still out on whether they’ll be able to maintain the extraordinary pace they’ve set themselves.

*In fact, it turned out to be about 23 years, but I wasn’t far wrong, so let’s not split hairs.

Back in 1985, I’m home from university for a couple of weeks and looking forward to seeing old schoolfriends again. My time off is spent in a blur of sport, reading, socialising and alcohol. These days, I’d be exhausted just thinking about it. But when my diary reaches the end of the holiday, I’m lamenting the lack of excitement, and reflecting that even though I only left my family for the first time a few short months ago, the break is already permanent. I already know that I won’t live at home again.

Fast forward to today, and no matter what your preference, your choice might not be quite so clear cut. According to the UK Office for National Statistics, the number of adult children living at home with their parents has increased by 20% since the end of the nineties – with limited job prospects, stagnating incomes, rising accommodation and living costs, student (and other) debts, and relationship issues all playing their part.

As usual when something like this comes along, we’ve been busy inventing new names for what’s happening – largely as a means of pretending that we’re more in control of it than we actually are.

The winner so far is almost certainly the idea of the ‘Boomerang generation‘ – in which children leave home only to return to live with their family a few years later – which has the advantage of being a ready-made throwback to the original ‘Baby Boomers.’  The more folksy-sounding ‘twixters‘ has been mooted (originally by Time Magazine) but has never quite caught on, despite spawning an indie TV series of the same name. Then there are the usual silly acronyms such as the Yuppie-derivative, ‘Yuckies‘ (Young Unwitting Costly Kids), and the even more outlandish ‘Kippers‘ – Kids In Parents’ Pockets Eroding Retirement Savings – which was coined by the Prudential in 2003.

In Germany, young adults still living at home may find themselves labeled ‘Nesthocker,’ (young birds that stay in their nest for a long time) and are said to be living at ‘Hotel Mama’ – a similar idea to the British ‘Bank of Mum and Dad.’

In Italy, Tommaso Padoa-Schioppa – considered one of the founding fathers of the European single currency – caused a stir in 2007 by referring to stay-at-home children as ‘Bamboccioni‘ – conjuring up an image of clumsy, overgrown babies unable or unwilling to make decisions for themselves.

In Japan, the language sounds even less kind. A variety of cultural and economic factors have resulted in a large constituency of what have become known as parasaito shinguru –  ‘Parasite singles.’

Whichever names eventually stick, given the scale of the changes since last-minute Baby Boomers like me flew the nest, it seems unlikely this shift is going to be reversed anytime soon.