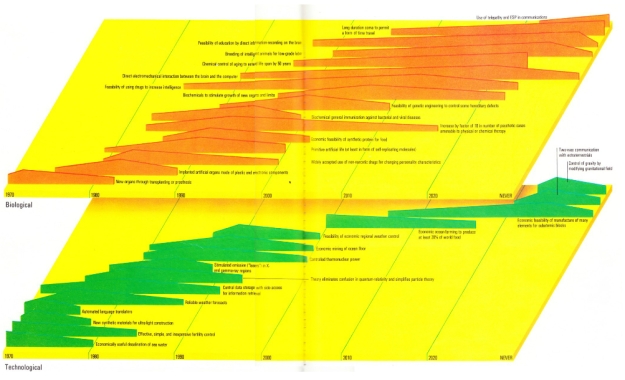 I’d like to introduce you to Life in the Future, one of my all-time favourite books, which got a passing mention in my diary on 26th July 1986, 28 years ago today. It was published in 1976 and still graces my bookshelf.

My favourite bit of the book has always been the double-page spread above, illustrating a Delphic Study from the mid-60s in which a host of experts were asked when they thought specific technologies might become available. Their answers were collated and plotted on a timeline (starting in the 1970s and finishing with ‘Never’), with markers to show when 50% and 90% of them agreed a particular technology would be in use.

The predicted dates were only part of the fun for me. What really interested me was which technologies had been chosen. My favourites – truly children of their time – were:

Re-read rather ironically from my vantage point here in the far future – some way past the previously mythical 2000 AD – the book as a whole provides a fascinating insight into 70s thinking.  The influence of the  preceding few years is obvious: the new liberalism and free thinking of the 60s, the 70s energy crisis and the expansion of nuclear power (the accident at Three-Mile Island was just a few years away), the rise of the environmental movement, significant improvements in medical technology  (the first heart transplant was already old news by this point), the development and early use of packet switching telecommunications networks, and so on.

Longer-term hopes featured in the study included the feasibility of education by direct information-recording on the brain, the breeding of intelligent animals as a low-grade labour force, the control of gravity by modifying gravitational fields and economic ocean farming to produce at least 20% of the world’s food. Wonderful stuff.

Despite the boundless technological optimism on show, the experts had to draw the line somewhere. They baulked both at the use of telepathy and ESP in communications, and at the idea of induced long-term comas used as a form of time travel.

Before long, I’ll be reading Life in the Future on a date beyond the end point of the study, which was around 2020. Compiling a list of likely technological change over the next 60 years would be just as difficult today as it was back in the 60s – but it might be fun to try (suggestions below please!).

Finally, it’s worth noting that while the study was busying itself with telepathy, controlling gravity and alien contact, it missed a few rather important developments that we take for granted today:

…to name but three!

If you were taking part in a similar study in 2014, I’d love to know what key technology breakthroughs you’d expect between now and 2080. Who knows, if we compile a big enough list, the Internet could help us run a Delphic study of our own!

*Life in the Future was written by Michael Ross-Macdonald, Michael Hassell and Stuart McNeill. I can’t remember how I came by it (I wasn’t keeping a diary back then!), but it’s essentially a broad and very readable look at predicting the future and how people affect it by the way they organise themselves and live their lives. I realised as I got older that  it was written with a clear environmental slant which was very new at the time. I owe it a lot.

My diary for this period 28 years ago makes a series of slightly concerned references to an ‘apparently quite serious’ nuclear accident in ‘a place called Chernobyl‘ – a previously unheralded town in the then Soviet republic of Ukraine.*  With typical reluctance, the Soviet authorities only agreed that an accident had taken place after the radiation alarms went off at the Forsmark Nuclear Power Plant in Sweden – over 1,000 kilometres away.

‘Apparently quite serious’ turned out to be a significant understatement. Chernobyl remains the worst nuclear power plant accident in history (in terms of cost and lives lost) and is one of only two to reach the maximum classification on the International Nuclear Event Scale – along with the Fukushima Daiichi tsunami-related meltdown in 2011. Its effects continue to be felt to this day.

A decade earlier, the accident at Three Mile Island had thrown doubt on the future of nuclear power, but Chernobyl cast an even longer shadow. It quickly became impossible to imagine a completely ‘safe’ nuclear plant, many countries began scaling back their nuclear ambitions, and 70’s-style ‘Nuclear power? No thanks!‘ (or more frequently, ‘Atomkraft? Nein danke!’) stickers began to proliferate once again.

Yet despite all this, the industry survived and eventually began to thrive. In many ways, the longer-term impact of Chernobyl was to promote the international nuclear cooperation which has resulted in today’s more robust global safety regime.

Nuclear remains controversial for obvious reasons, but with the end of fossil fuel supplies in sight and global warming an increasing threat, many countries – the UK included – are returning to it as the possible answer both to longer-term energy independence and challenging climate change targets. Even some of the early environmentalists who were instinctively anti-nuclear – such as Whole Earth Catalogue author Stewart Brand – have begun suggesting we should revise our thinking. Brand now sees nuclear as the cleanest current form of reliable, grid-scale energy generation, and believes there are practical ways of dealing with related issues such as reprocessing, waste storage and weaponisation.

Remembering how I felt watching events in Russia unfold, it’s hard to believe that the push for ‘green’ energy is yet to yield a resounding winner. And if the post-Chernobyl nuclear makeover continues, it may be some time yet before the incentives to develop clean renewables are quite as strong again.

*These sorts of national boundary changes are nothing new to followthehumming – and current events in Ukraine suggest more may be on the way before too long.